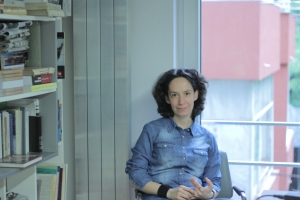 Kamelia Spassova is a senior assistant professor in Comparative Literature in the Department of Theory and History of Literature at Sofia University.  She has been lecturer at the Slavic Institute, Department of Philosophy, University of Cologne (2016-2018) and Junior Fellow at the Centre for Advanced Study in Sofia (2014-2015). She has published the book Event and Example in Plato and Aristotle (in Bulgarian, 2012), which deals with the tension between literary examples and exemplarity work in philosophical and theoretical research. At present, she is completing a book on of the transformations of the concept of mimesis in the 20th century. Spassova has taught a number of courses involving the intersection between literature, philosophy and science, including  “Chaos and Disorder (Philosophy, Literature, Science)” (2015, Sofia); “The Power of Example: Philosophers read Literature” (2017, Sofia); “Self-Reflexivity in Literature, Philosophy and Art” (2018, Köln). She is editor of the cultural weekly Literaturen vestnik.